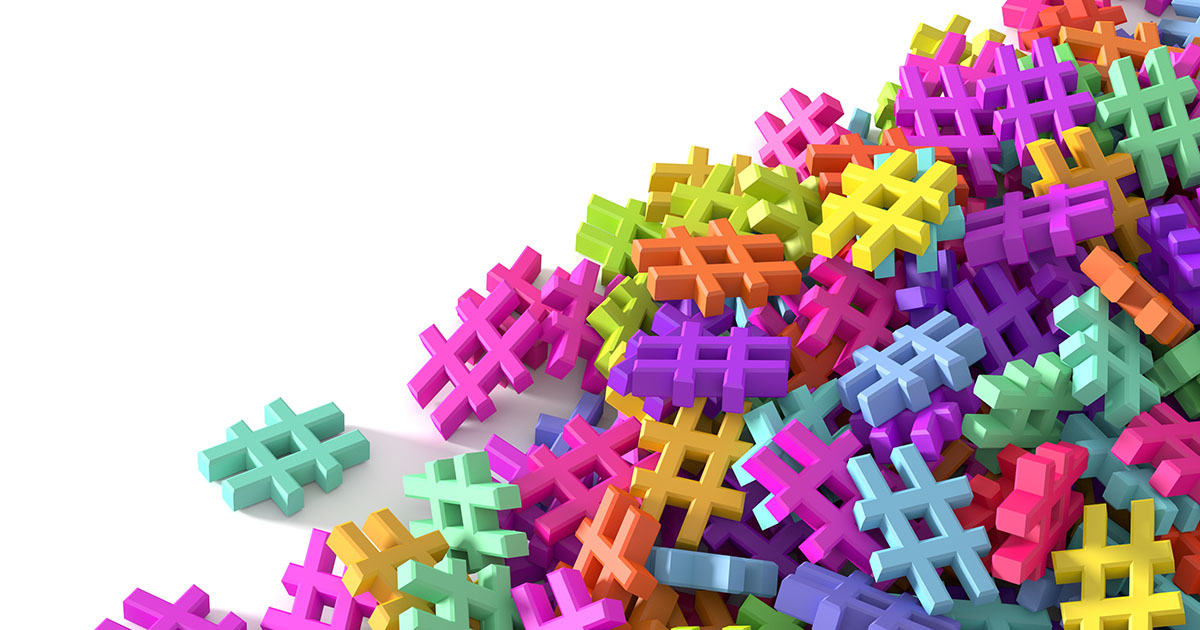 Hashtags are ubiquitous in social media. They are used for branding and marketing campaigns, to make statements, invoke humor, and even to document revolutions. They unite conversations, make content more discoverable, and honestly, it’s hard to imagine digital life without them.

Best practices for using hashtags vary by platform, but there are common benefits to incorporating them in your digital marketing strategy. We’ll cover some general rules here. For a deeper dive, check out our related post that covers hashtag best practices for Twitter.

A brief history of the hashtag

The hashtag, as used in social media, got its start on Twitter, but it wasn’t immediately embraced. In 2007, product designer and social technology expert Chris Messina suggested to his Twitter followers that using the hashtag might be a good way to organize tweets.

He used his blog to explain his thinking about how hashtags could be useful. He also approached Twitter directly, but they initially rejected the idea saying, “These things are for nerds.” It took some time and convincing, but Twitter finally embraced the hashtag in 2009 by allowing users to search for hashtag terms. Over the next few years, Instagram (2011), Facebook (2013), and other social media services also adopted the use of the hashtag.

The infographic below, originally created by OfferPop (now Wyng), provides a visual history of the hashtag.

This simple tool vastly improved functionality on the web. And, it has proven to be both a boon and a bane for digital marketers, as HubSpot explains in a post about hashtag successes and failures from seven big brands.

We have outlined some strategies and tips for you to consider as you create your own campaigns using hashtags.

Each social media platform uses hashtags differently. But there are some best practices that apply to all platforms. Here are some tips for making hashtags work for you:

Be brief - Don’t create hashtag run-on sentences and paragraphs. Keep it short and simple. If it can be said in a sentence, don’t make it a hashtag, especially if you’re representing a business. Instead of #wemakethebesthotdogsinthecity, consider #topdog.

Don’t use punctuation or spaces - If you have ever used a hashtag only to discover that the last portion dropped out, it’s likely because you used space or punctuation, neither of which will work in a hashtag. Instead of #it’sthebest use #itsthebest.

Use hashtags sparingly (most of the time) - Different platforms have different tag best practices, but unless it’s Instagram, don’t go on a hashtag frenzy. Twitter, Facebook, and LinkedIn all incorporate hashtags in their search, but most people don’t want to scroll through blocks of hashtags in their feed. Twitter’s 280-word count is far too brief for such shenanigans. And, the focus of Facebook and LinkedIn is building connections.

Incorporate tags both within your message and after it - Highlighting words using hashtags within a post helps in search and calls attention to key points of your message, which can help you catch someone’s attention as they scroll through their feed.

Research before using a new tag - Make sure you know what context and content is associated with a tag before you use it yourself or create a campaign around it. You don’t want to use a tag for a branded campaign that will get lost in a sea of other unrelated mentions.

Alternatively, you don’t want to create a campaign that is completely out of context or misinterpreted. In July 2011, sweet bread company Entenmann’s told followers that they should feel #NotGuilty for eating their low-calorie products. At the time, the Casey Anthony trial had just ended, and “not guilty” was trending after the verdict. Twitter users saw this ill-timed tag and assumed Entenmann’s was using the trial (and the tragic death of Anthony’s child) to generate brand visibility. Entenmann’s deleted the tweet and apologized, but by then the damage was done.

Finally, watch your phrasing, or you may end up with a catastrophe like the hashtag first used to promote Susan Boyle’s album release party – #susanalbumparty. While capitalization might have helped, most people don’t use upper case in tags.

When used properly, hashtags can be powerful marketing tools. You can use them to raise awareness for your brand or product, to monitor activity and sentiment, or to help you find an audience. Make sure you know how to channel their powers for good, and you will avoid the evil trolls that come with missteps.

Need help with your social media campaign? Contact us with the form below to start a conversation.